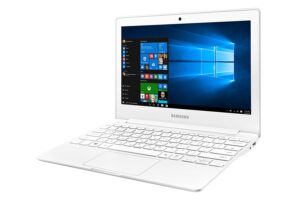 Recently, I needed a new laptop. I surfed the internet for specifications of computers in order to get one that would match my interests and fit my low-budget plan. I stumbled on a well-detailed review of the Samsung NP110S1K-K01US Notebook of cheap awesome gaming laptops, and as someone who wouldn’t trade computer games even for free pizza, I fell in love with this Samsung notebook immediately upon seeing it. Upon first glance and skimming the specs, I knew that this was it; if I would get a laptop, it had to be this or none. Its semblance to Mac Book and the sleekness are nothing short of artistry.

I have been using it for a month now and could say that buying it is the best decision I have made this year yet without exaggerating (I’m so indecisive). The flatness of the laptop makes carrying it anywhere extra easy for me. Just like Mac Book, its lightness complements the flatness, and I can hold it with just one hand.

Okay, enough about me, let’s talk about the specifications – which, of course, is the real deal – of my exquisite laptop.

Why I LOVE THE SAMSUNG NP110S1K-K01US NOTEBOOK

BATTERY LIFE: Initially, I found it hard to believe when I read that its 30Whr non-removable battery can last for up to 12 hours. This struck me as almost impossible for a system that appeared so flat (and would most likely have a small in-built battery), but there have been nights I forgot to plug it to an electric source or shut it down before sleeping; I would wake up the next morning to see that its battery is nowhere near dying.

WEIGHT: 2.65 lbs. I need not stress how extremely portable it is, because I have already talked about it. Carrying the notebook laptop around is as easy as carrying a notebook (as its name implies). You could as well travel with it as it can fit into a small backpack.

PERFORMANCE: It has a dual-core Intel Celeron N3050 processor; a frequency that ranges between 1.50 GHz and 2.16 GHz; 2 megabytes of L2 cache; and thermal power of 6 Watts.

MEMORY: The system memory is with the capacity of 4 GB, and it runs at 1600MHz. This memory is quite enough for most of the things I need to store on the system, and the speed is super awesome as well. The solid state drive has 128 GB which I am not even close to using up to its quarter, surprisingly.

DISPLAY: The notebook comes with an 11.6-inch screen which has a LED-backlit display. The resolution is 1366 x 768 pixels. All these contribute to a graphics card that gives me something that could almost pass as a 3-D experience; it is flawless!

INTERFACE: The plug-ins are enough for as many connections I want to make, they are: USB 3.0, USB 2.0; and HDMI-out ports. Also, it has one Audio combo jack and a MicroSD card reader.

Are you looking to buy a laptop that would give you a worthwhile computer usability experience? Your search ends here; the Samsung NP110S1K-K01US Notebook M SSD Laptop is all you’ve been looking for.